“We’re concerned with trying to be empathetic and trying to understand the impulses and dependencies of those close to you,” says Swordfish singer Chandler Lach. From the basements and living rooms of Ypsilanti, MI Swordfish were formed and their penchant for connecting to their fans comes from their down to earth upbringings. Lach goes on to say “Everything from mental health, heartbreak, existentialism and accidently burning your friends with lit cigarettes is addressed on this album.”

Rodia takes cues from the beautiful guitar licks of American Football, the vocal urgency of Sorority Noise and the instant gratification of Joyce Manor, all while elegantly incorporating trumpet throughout each well crafted song. The eight tracks work together to bring the musings of anxious and heartbroken adolescents to a broader scale. 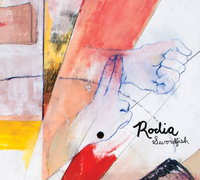