Band camp is a transformative time for anyone. It’s where identities are shaped, awkwardness is traded, and a lifelong appreciation for music can either be fostered or frumpled. For Allston power-pop trio Lilith, it proved more revolutionary than routine, as the band’s core lineup—vocalist/guitarist Hannah Liuzzo, vocalist/bassist Kelsey Rose Francis, and drummer Adam Demirjian—became friends over four years of summer sessions. After a pair of critically acclaimed releases (both earning top end-of-year honors via Allston Pudding), this lifelong group of friends has found a second guitarist in Gabriel Panadero and the way to their debut album. Safer Off shows off a lot of what band camp attempts to instill in a musician: discipline, attention to detail, and creativity in spite of uncomfortable change.

“I think the record is mostly about redefining a concept of strength,” Liuzzo explains. “Strength isn't quietly enduring abuse, instead it's knowing what you deserve and advocating for it.” Safer Off may be brimming with color and youthful exuberance—whether in the whirling synths churning across key moments or the album’s sunny guitar tones—but with every confident musical choice, there’s a darkness threatening to cloud the shine. “Vacation” checks in with an old friend who’s changed for the worse, and “Coward” does the same for someone failing to accept proper accountability. All the while, Lilith’s cast of characters write letters that remain unfinished and undelivered, but it’s after these broken correspondences where clarity comes through. By the end of the record, Safer Off’s stamped and sealed on a different message: one where Lilith can march to their own defiant and individual beat, one leaving their old haunts—flaky exes, doomed music industry mainstays, and other dangerous games—behind. 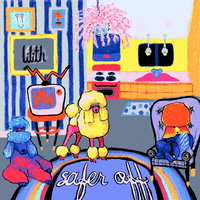